Rhopoint Instruments is a UK based manufacturer of test equipment primarily focussed towards appearance quality. The company was founded in 1988 as a manufacturer of glossmeters. Since this time, the range has developed and grown to test not just gloss but many other parameters of total surface quality including orange peel / DOI, haze, texture, defect analysis, shade and opacity.

Our handheld instruments are designed to be used in both research and development and production environments in numerous industries including: paints and coatings, automotive, yacht manufacturers, metal polishers, polished stone, smart phone, tablet PC and laptop covers, coil coaters, printing and graphic arts, powder coating, furniture and plastics. The Rhopoint MFFT –Minimum Film Forming Temperature measuring instrument is trusted by laboratory professionals in the leading global coatings manufacturers for measuring the temperature point of coalescence of a latex, emulsion or adhesive.

In 2006 Rhopoint Instruments acquired the Hanatek range of packaging test equipment testing many parameters in order to provide manufacturers and users of packaging material with consistently faster packaging speeds.

In 2013 Rhopoint Instruments launched the Optimap PSD which marks a revolution in the control of surface quality. For the first time subjective visual assessment can be replaced with reliable, representative measurement. The Optimap™ is the first portable instrument to map and measure surface texture. Surface texture is used to quantify visible faults such as orange peel, waviness and DOI problems. It can also be used to identify local faults such as inclusions, pinholes, runs, sags, blisters etc.

In a single fast operation the Optimap™ maps the topography of a test surface displaying faults and texture in incredible detail. Mapped information is processed into objective surface measurements that can be used to effectively control product quality. variety of surfaces: semi matt surfaces to polished mirrors, small & curved parts.

Rhopoint Instruments is part of the Rhopoint group of companies all of which operate to ISO9001:2015 Quality Management Systems. Other subsidiaries include:

Rhopoint Sourcing – Supports purchasing teams within many sectors of industry including, aerospace, transportation, medical, and industrial electronics by securing supply of obsolete, allocated, end of life and otherwise hard to find electronic components.

Rhopoint Metrology – Established in 1978, Rhopoint Metrology (formerly Micron Metrology) is one of the leading providers of UKAS accredited calibration services in the UK offering both on and off site UKAS calibration to a range of industries including; aerospace, transportation, manufacturing, automotive, telecommunications and medical. 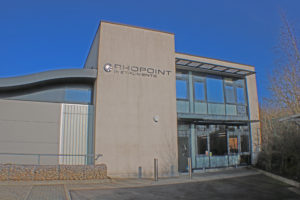 Our products are distributed by an experienced global network of agents and distributors, many of which are factory authrorised calibration and repair centres which have been partner companies for Rhopoint for more than 20 years.